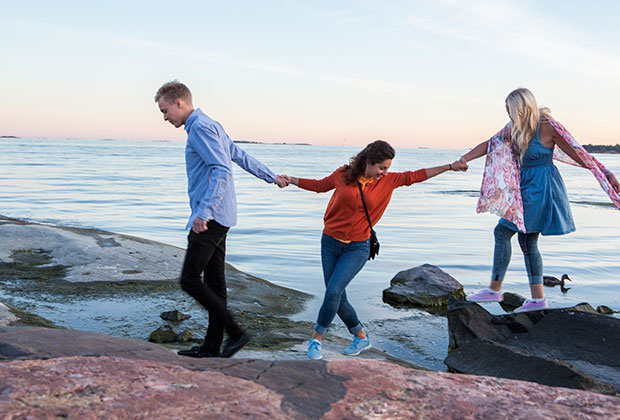 Pedro Góis (2017) informs that in USA alone, immigrants have been involved with founding companies such as “Google, Intel, WhatsApp, PayPal, eBay, Tesla, and Yahoo” and even though immigrants “make up less than 15 percent of the US population, skilled immigrants account for over half of Silicon Valley start-ups and over half of patents”.

Could this be achieved in Finland as well?

Building companies operating in English and having international potential such as the IT companies Góis mentioned will keep being created in Finland. However, working in many professional fields here requires the knowledge of our national language(s), mainly Finnish but speaking also Swedish can be an advantage. The language skills and navigating how our education and work-life operates typically takes time in the beginning. Yet they are significant puzzle pieces to integration.

Back to studying basics?

Anything human rarely surprises me, but I must say that the first time I heard a foreigner having a Bachelor´s Degree Certificate telling me he is studying in Finnish Basic Education – I went speechless. Basic Education is the school Finnish youngsters nearly always complete by the age of seventeen (EDUFI 2017a). Sadly, we in SIMHE-Metropolia have had a handful of clients like him who have taken too many steps backwards.

It touches my heart when a client says after a thank you that they wish they had met me X years (that number could range from two to multiple years) earlier. Thus, I completely agree with the Minister of Education, Ms. Sanni Grahn-Laasonen, “We cannot afford to miss or waste anyone’s skills.” (Ministry of Education and Culture 2017b) and therefore need to better and faster recognize and utilize immigrants’ existing skills.

My first three months in SIMHE-Metropolia have flown by fast because there is no shortage of clients. We guide those immigrants who reside in Finland but are not currently degree students in higher education (=HE) here. The minimum criteria to become a SIMHE client is that one is eligible to apply to HE in their home country and therefore in Finland as well. Actually, most of our clients already have at least one HE degree.

SIMHE-Metropolia has many services which we constantly develop. I mainly focus on group and personal guidance. In personal guidance discussions, we reserve an hour so we can holistically go through the immigrant´s situation and possible options. We focus on the topics they want, most typically connected to studies and career. SIMHE-Metropolia has been operating as of spring 2016 and already some of our clients have succeeded in gaining admission to studies or work where they were hoping.

When it comes to degree studies, in my opinion vocational institutions are further with flexible options like apprenticeship training and competence-based qualification (terms from EDUFI 2017b). Fortunately, there is a momentum in Finland to accelerating immigrants’ integration seen in for example the launch of International House of Helsinki and that Espoo adopted English as their third official language. The Minister of Education allocated in total 5.5 million euros to various measures promoting development of for instance immigrants´ educational paths (Ministry of Education and Culture 2017a).

From prep courses to graduates

Some HE institutions like Metropolia University of Applied Sciences (UAS) have preparatory courses for immigrants. One of the projects which received funding from the Minister of Education is called in Finnish “Valmentavasta valmiiksi” where we in Metropolia UAS have teamed up with eight other UAS to develop preparatory courses. The idea is to develop them to be more nationally compatible and that the student who wants to graduate with a degree in higher education on that field would have a clear path for that.

I have met so many clever and inspiring immigrants, most of whom are eager to stay and become full members of the Finnish society as fast as possible. Thus, I hope that initiatives like the above mentioned will help to make it more and more possible. I wish work places will to a greater extent take advantage of the diverse skills and ideas our multilingual and -cultural clients can bring.

Ministry of Education and Culture (2017a) Solutions for accelerating immigrants’ educational paths are sought and supported. Press release published in 11.8.2017 at http://minedu.fi/artikkeli/-/asset_publisher/maahanmuuttajien-koulutuspolkuja-vauhditetaan?_101_INSTANCE_0R8wCyp3oebu_languageId=en_US [retrieved 1.12.2017]

Ministry of Education and Culture (2017b) Steering group: We need better ways to recognise immigrants’ skills. Press release 25.9.2017 published in English on 29.9.2017 at http://minedu.fi/en/article/-/asset_publisher/maahanmuuttajien-osaaminen-tunnistettava-nykyista-paremmin [retrieved 1.12.2017]