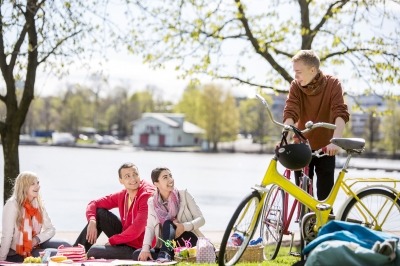 Since the last autumn, there has been an intense debate on what should be done in this new situation with a growing number of asylum seekers and immigrants that has exceeded even the wildest guesses. ”Rajat kiinni”, “Close the borders”, has been one approach and on the other hand it has been considered if immigrants could be seen as a resource to benefit Finland. Metropolia’s solution is to offer a service concept produced by the SIMHE project, which is funded by the Ministry of Education and Culture. The aim is to recognise the competences of highly educated immigrants and to guide them, and those who are eligible to apply to higher education, to interesting and meaningful educational and career paths.

Setting objectives for the project is easier than implementing them into contemporary society.

When choosing the content to the recognition of competence, we looked at the issue from a perspective of integrating immigrants into Finnish society.

30 immigrants participated in the recognition of competence day out of which 28 were male and 2 female. The majority of them were from Iraq, a few from Syria and Afghanistan, one from Iran and one from Belarus. The participants’ age varied between 20 and 44. A few of them had been in Finland for nearly three years, the majority for 6-10 months. It was possible to do the test in Arabic, in English or in Finnish. The language options were based on the fact in which language the participants had filled-in the enrolment form. The results will be ready soon and we will reflect on them as well as on methods used in the recognition of competence together with participants and our experts.

We need to reflect critically on both – the used methods and the chosen fields of competencies.

Do the individual’s and society’s perceptions about adequate educational and career paths meet? This is also an interesting question to be considered later.

How do I get a chance to show my competence, attitude, motivation and will to do anything reasonable that would benefit both myself and Finland? How and where can I get more competence that can help me to get a job? These kind of questions are now directed to Metropolia. At this point, I must humbly state that these things we work with in the SIMHE project launched this spring are quite enormous. In the project we will consider the new models to recognise the competence of highly educated immigrants and asylum seekers and to guide them to adequate educational and career paths. This is done together with the Ministry of Education and Culture, Finnish National Board of Education, CIMO, Ministry of Employment and the Economy and the UniPID network.

There is clearly a demand for our new service concept – hopefully employers and educational institutions will grasp this new potential. Let´s turn the societal debate even more towards the direction of possibilities!